The ‘doctrine of universal truths’ eluded to the presence of a Constant in life. That Constant is God. This God resides in the ‘absolute’ centre not in a political centre. So politicians might claim to occupy the centre ground or might even claim to be able to shift the centre ground (to the right or to the left). All these are possible where a political centre is concerned. However, the centre where God resides is immutable. It follows therefore, that if God is not going to change, then we have to change, if we want to stay close to Him. You, however don’t have to. That is a choice we all have.

It is because of this that we humans have to continue to change in order to maximise His benefit to us. The goal being to gain a better understanding of God and His will. I will explain this using classic Newtonian Physics:

We know that momentum (mass x velocity) can change. When it does, we talk about acceleration (or deceleration – which is just acceleration in the opposite direction). It is prudent sometimes to accelerate and sometimes to decelerate. It is never prudent to stay still. The only human that stays still is figuratively dead – That is why I find this clip fascinating! The Constant that is God, is the only being that stays still and is alive! Newton, in his 2nd law of motion, proposed that acceleration of a body is, and in the same direction as, the net force acting on the body, and inversely proportional to its mass. The bigger the mass, the less likely it is to accelerate. The mass of God is so big that it is immutable. As humans, our mass is so small (you only have to look at the vastness of the world around you), that change is inevitable. You will have to decide, as a free thinking human being, what the net force that is driving your acceleration is. If the impulse (net force as a function of time) is determined by the constancy of God, then the outcome is assured. Otherwise, the outcome is uncertain. One of the reasons why we worry is because of the uncertainty of the future. Everyone wants a certain future and we frown at the short-termism of some protagonists. Those protagonists are promoting short-termism to guarantee what they perceive as their long-term security.

How does one change?:

The best way to change is to change everyday – embrace the change process. Those that change all the time can give a perception of not changing at all. I am not suggesting compromising your morality – No!  I am suggesting you give change a genuine chance, give it a airing and anchor that change to what God is telling you. For this to work, you need to believe in God or a Constant. When my moment of truth occurred, I made subtle changes in the way I approach different scenarios. I didn’t make a song and dance about it simply because that moment was very humbling.

How do I know there is a Constant?:

The events described in the ‘doctrine of Universal Truths’ is my proof that there is a Constant. For some, this might not be enough. So, I will illustrate this by drawing on the work of the Swedish astronomer Anders Celsius, Dutch-German-Polish physicist Daniel Gabriel Fahrenheit, and Belfast-born British mathematical physicist William Thomson, 1st Baron Kelvin. These scientists made important contribution to the way we measure temperature today. The three scientists defined different scales for measuring temperature. The funny thing is this: without constants, the scales does not work! It is the constants that enables the transition (or conversion) from one scale to another! Without it there is no transition. I’ll explain below (see diagram below). 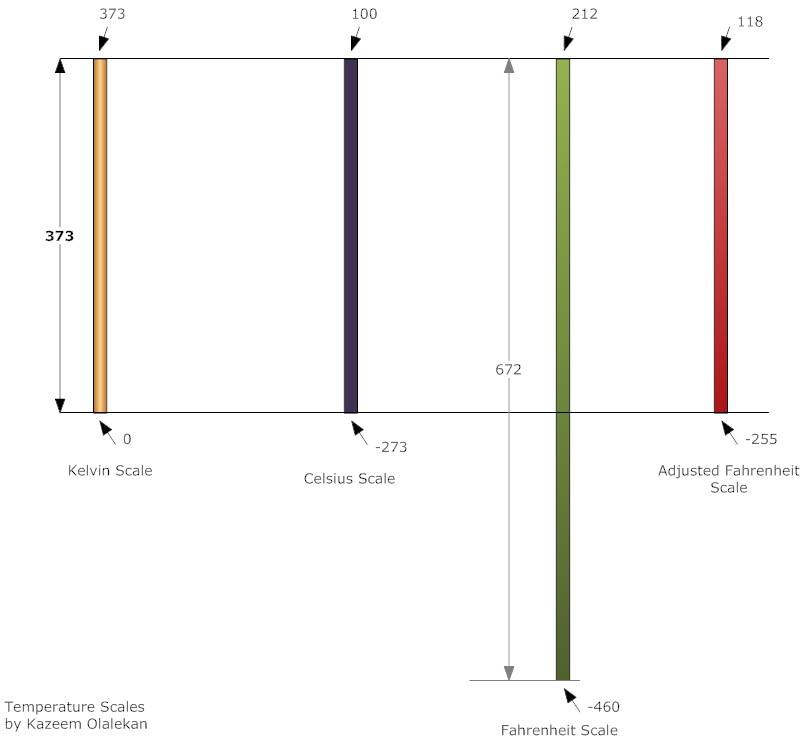 When Celsius described his scale, he defined  0 °C as the freezing point of water and 100 °C was defined as the boiling point of water, both at a pressure of one standard atmosphere with mercury being the working material. When Kelvin described his scale, he started to talk about absolute zero. Even then, it was realised that there is a need to describe an ‘infinite cold’ in order to standardise and make sense of the different scales emerging. All the different scale were measuring different things. It so happens that when you measure the same things on a Kelvin and Celsius scale, the difference between the values is a constant (373) . Absolute zero by definition is equivalent to -273 °C and water’s boiling point at 1 atmosphere is equivalent to 100 °C (see picture). It is this constant, that makes it easier to convert from Kevin to Celsius and vice versa. If the normal human body temperature is 37 °C, then what will that be in Kelvin?

As far as mathematics go, that is elementary my dear Watson. The Fahrenheit scale offers some sort of a challenge. When you measure the same things like absolute zero and water’s boiling point at 1 atmosphere, you get -460 °F and 212 °F respectively. The difference between these values is a bigger number of 672! In order to solve the problem of conversion between the scales, mathematician start looking for the constant (- In life we do exactly the same when we want to solve problems but we use different metaphors). What the mathematician does is squeeze the Fahrenheit scale to fit the constant model that we have already established. It uses ratios to achieve this:

The above equation is simply saying that 212 is a proportion of 672 scale. What proportion (y) will this be on a 373 scale?

This process is equivalent to multiplying by 373/672 OR 0.555 (our new constant for this conversion)

To convert the human body temperature of  37 °C to Fahrenheit, all we have to do is this:

p = 55; we then need to convert this to the real Fahrenheit scale by dividing by our constant, 0.555

The point here is that we needed to squeeze our unwieldy Fahrenheit scale into the known constant before we could convert or transition onto another scale or another plane of existence. It is the understanding of that Constant, which ‘the doctrine of Universal Truths’ is hinting at.

Now does anyone know at what temperature my head will spontaneously combust in K,  °C and  °F? Or what it will take to cool my boiling brain? Yet another points of discussion.